It always seems that once Halloween hits, the rest of the year just dissolves. We’re already 2 days away from Thanksgiving, a month away from Christmas and a little more than that away from 2010…yeesh. I’m going to see a lot of people in a short amount of time, and travel a little more than I’d like to, but should be worth it! Vegas may be in my New Years forecast, but I’ll keep you posted on that one. haha. 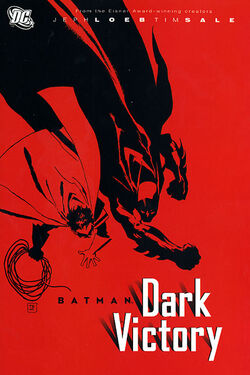 I just finished reading Batman Dark Victory, which is kind of a continuation/sequel to The Long Halloween. I don’t know how he does it, but Loeb sure knows how to use most every major batman villain and supporting cast while at the same time introducing new characters and expanding lesser known characters without overbearing the reader or making the book too cluttered. I definitely think that Tim Sale’s art is starting to definte the Gotham City i know in my mind!
Favorite song of the week is IAMX – “Spit it out” (Designer Drugs Remix). Heard it at a dance party, and I had heard the original version a few weeks before that. The remix greatly enhances and compliments the original, and something about the beat just makes it very happy and (obviously) energetic.
Favorite video of the week is definitey Beyonce feat. Lady Gaga “Video Phone”. Why do I like it? Beyond the infectious beat? Beyond the Sin City/Comic Book inspired costumes and ridiculous amounts of color? Beyond the sweet nod to Reservoir Dogs AND Kill Bill in the beginning? Beyond the intense editing to go along with the beat? Ok, I guess don’t have any other reasons beyond those…but those are some good reasons to like it.
Also a good watch is Lady Gaga’s “Bad Romance”. A friend of a friend is the guy on the far left in the intro shot. This whole video is just insane and the costumes are ridiculous and its so well shot and production value is great! Eye candy indeed…love the spinny shot with the floating diamonds. haha.

And last but not least is my latest drawing. After reading a couple of the new Batgirl issues with a new lady under the pointy ears, I decided to draw an homage to the original Batgirl, Barbara Gordon. (Yes I know she wasnt the first, but I still consider her the original!) Click the thumbnail to see the bigger image on my DeviantArt Account.

Eat turkey, get fat, have a good one!